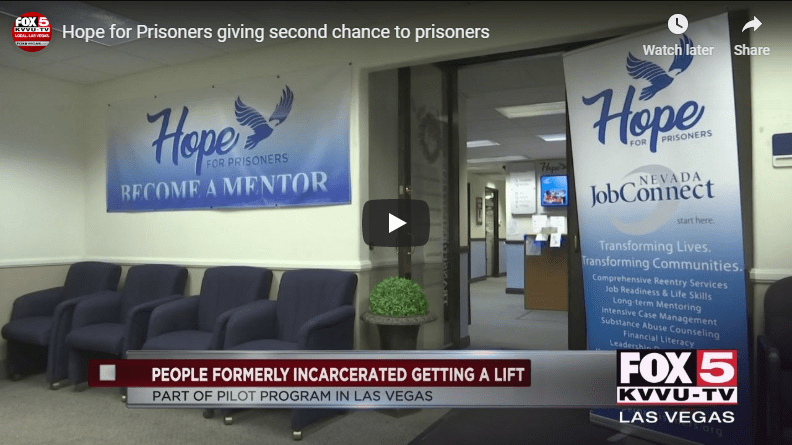 LAS VEGAS(FOX5)– A new pilot program is giving a lift to people out of jail, looking to rejoin the workforce.

Lyft and Hope for Prisoners are teaming up to pay for people’s rides, to and from work, until they get their first paycheck.

Korey Fencl just got out of jail in September. He doesn’t have a car or a driver’s license yet. So he said this program is crucial to helping him keep a steady job and provide for his family.

Fencl spent the past nine years in prison. When he was sentenced, the idea of ride shares was just gaining ground.

“It blew my mind, like just some strangers come and pick you up?” said he wondered.

Fencl heard about the program in jail.

“A lot of the things that I remember from 2010 are obsolete,” he said. “They don’t even matter now.”

When Fencl was released in September, he moved in with his wife and nine-year-old son.

Fencl got a job at a valley restaurant.

“Everything I did in prison, washing dishes, food prep, cooking in prison is implemented in my life right now for a real job,” he said.

But he needed a reliable way to get there and back.

“Getting on the bus, taking the bus to work, having to walk, you’ve got to leave 3-4 hours in advance just to make sure you’re not late,”said Fencl.

Through a pilot program, Hope for Prisoners helps people like Fencl save money and time on his commute.

“So the first time I did it, it was like I was nervous, I was reluctant to pull on the door [open],” he said. “With me working, I’m working for my family. I don’t want to be working so much that I’m not there, so Lyft allows me to be there.”

Hope for Prisoners said finding a job can be tough, but getting there, shouldn’t be.

“Some are on the outskirts of town, so some of the construction jobs are in brand new areas in the city, where they’re currently building,” Jon Ponder said. ”We have to find a way to get our clients to and from that job site. Then they become part of that tax base, they become the fuel and economic engine of our community.”

Lyft has job access programs like this one in more than 35 other cities. Hope for Prisoners wants to expand the one here to pay for people’s rides to job interviews as well.