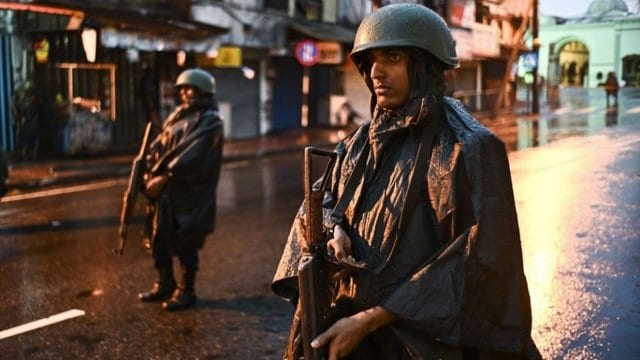 A crucial lesson from the carnage in Sri Lanka

The carnage by Muslim terrorists who slaughtered hundreds of innocent Christians, including foreigners, in Sri Lanka possibly could have been avoided, given that multiple warnings of an impending attack were issued as early as two weeks before the attack and intensified as Easter approached. The appalling failure of Sri Lanka’s government to take action reportedly was because of a feud between the president and prime minister that blocked the premier and the cabinet from intelligence briefings.

The tragedy in Sri Lanka carries a crucial message for America, now in the midst of a volatile time, when the politics of division reigns — pitting blacks against whites, the wealthy against middle-class and low-income Americans, and law enforcement against a vulnerable sector of the black community. Of all these divisions, the last is the most dangerous. The future of this nation is in jeopardy if the people who are sworn to protect us are the objects of attack and ridicule.

The flames of animosity against police in crime-plagued, drug-ridden urban neighborhoods have been fed by purported “spokespersons” of the black community who capitalize on the tensions to gain book deals, celebrity and political success. A recent, widely publicized example of this opportunism is the grandstanding by Rep. Bobby Rush(D-Ill.), who declared that the Fraternal Order of Police is the “sworn enemy of black people,” and activist Ja’Mal Green, who mocked the Chicago police as the “Blue Klux Klan.”

When tensions between police and residents of low-income areas have resulted in violent protests, it is the neighborhoods in which protests are staged that suffer the consequences; sometimes they are irretrievably devastated. And the tragic effects of the animosity continue through a state of “police nullification” in which, to avoid accusations of racism, the law is not enforced. Left unprotected, these vulnerable communities are plagued with skyrocketing rates of crime and violence. The leaders of the protests and those who showboat, such as Rush, will return to the comfort of their homes and not suffer the consequences of their actions.

Rush’s invectives provide a diversion from responsibility for the state of crime in his own city of Chicago, where there were more than 530 homicides last year — the majority of them black-on-black shootings — and where, in the absence of communication with distrustful residents, only 17 percent of homicides and 5 percent of non-fatal shootings were solved.

This scenario of domestic warfare and animosity sets a welcomed stage for a worldwide network of terrorists who prowl for opportunity. As Sri Lanka’s carnage warns us, the devastation that division brings to inner-city communities has the potential to expand to a nationwide level at the hands of an external enemy.

Our primary line of defense against such attacks lies in the vigilance and investigative ability of members of law enforcement. Their ability to detect a potential danger before an attack is carried out relies in large measure on the willingness of citizens with knowledge of a potential danger to report it and cooperate with the authorities. And that means there must be relational ties based upon trust that inspires confidence on both sides. Discussion and action must go beyond the arena of assigning blame and, instead, focus on identifying solutions.

I write this message from the site of Las Vegas-based Hope For Prisoners,an innovative and effective re-entry program for ex-offenders created 10 years ago by Jon Ponder, who turned his life around after years spent in and out of prison. Now he dedicates his time to empowering others to do the same. Since its creation, the Hope initiative has changed the lives of more than 2,300 men and women.

A surprising but powerful part of Ponder’s approach is enlisting representatives of law enforcement entities to serve as mentors who work one-on-one to provide support, guidance and links to opportunity to ex-offenders striving to take on their roles as spouses, parents and productive community members. Ceremonies for the program’s graduates typically are held at police headquarters, where proud mentors (including arresting officers), often in tears, applaud the men and women who have successfully reclaimed their lives.

This model has changed the lives and hearts of all involved, and uplifted and strengthened their communities. It also has the power to strengthen our national security, creating a unified front to counter threats and dangers from beyond our borders.