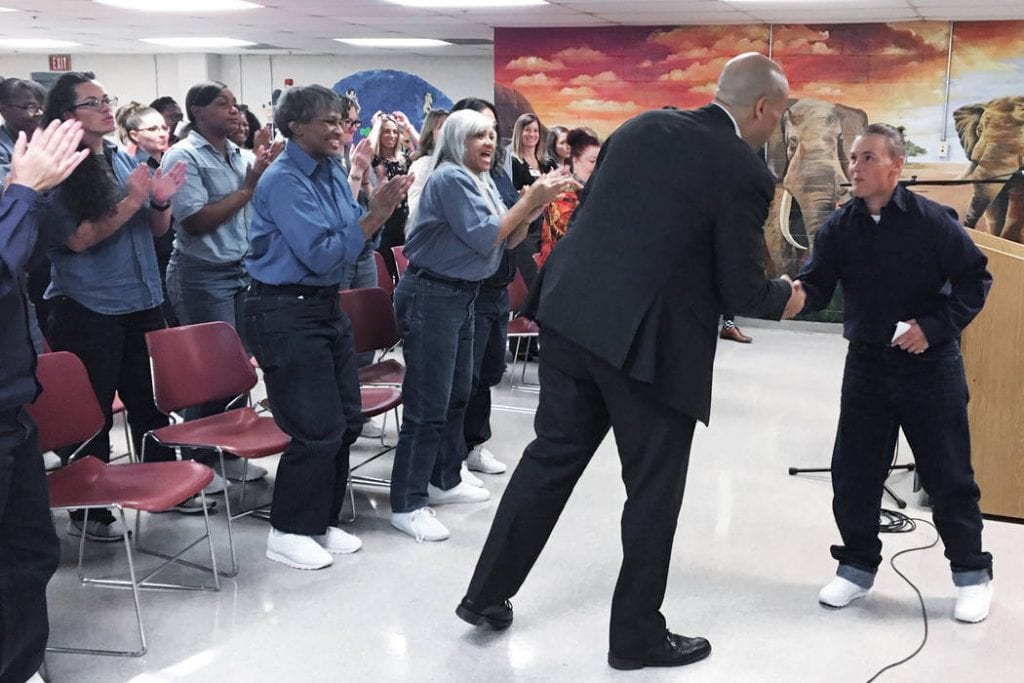 Democratic presidential hopeful Cory Booker, who has pushed for criminal justice reform during his campaign, shook hands with women in blue uniforms and standard-issue white sneakers Saturday afternoon at a Las Vegas prison.

After Booker and 18 other Democratic presidential candidates on Saturday participated in a UNLV forum hosted by the American Federation of State, County and Municipal Employees, the senator from New Jersey toured the Florence McClure Women’s Correctional Center in the northeast valley.

Before the tour, he listened to inmates speak about their experience taking classes through a College of Southern Nevada program at the prison, and their experience with the local organization Hope for Prisoners. Most of the 25 women enrolled in the highly competitive educational program listened as Booker briefly spoke about creating “more justice in our justice system.”

When it comes to the number of men and women incarcerated in the United States, Booker told the inmates that “we should not be an outlier in humanity.” The U.S. has the highest incarceration rate in the world, according to data available in the World Prison Brief.

Kathy Finster, an inmate in the CSN program, said she appreciated Booker visiting the prison, adding that many of the women have watched the senator on TV during the presidential debates.

“It helps any time there’s attention brought to the prison,” she said.

While he toured a section of the facility where general population inmates live, Booker was asked some pointed questions by women regarding their need for more prison programming and criminal justice reform in general.

“I have a question for you,” one woman said, arms crossed. “If you are elected president, what are you going to do about prison reform?”

Booker, who has previously spoken about criminal justice reform while visiting Las Vegas, told the woman he has already worked on bills designed to reduce incarceration and shorten sentences for prisoners, and if he became president he would continue to push for reform.

“This is one of my big passion issues,” he said to the woman, who told the senator she liked his response.

Booker walked around the room, shaking hands and chatting with the women. One woman shouted “welcome to Las Vegas” from the second-floor cells, while others thanked the senator for his visit.

“I appreciate you coming to see us and letting our voices count,” an inmate told Booker.

Booker has made criminal justice reform one of the focuses of his campaign. During Wednesday’s presidential debate, Booker confronted former Vice President Joe Biden on his role in passing a 1994 crime bill that disproportionately affected black Americans, after Biden criticized his criminal justice record as the mayor of Newark.

In a June interview with the Review-Journal, Booker said he has shown himself to be “an authentic leader” on criminal justice reform.

Jon Ponder, CEO of Hope For Prisoners, a program that provides support and job training for previously incarcerated people, said he was glad Booker visited a prison while in Las Vegas. Playing on the name of his organization, Ponder said a visit from a high-ranking political figure should bring hope to the prisoners.

“I think that for the prison system to get the level of attention it’s getting, it shows that the eyes of the nation are opening up to the issue,” he said.