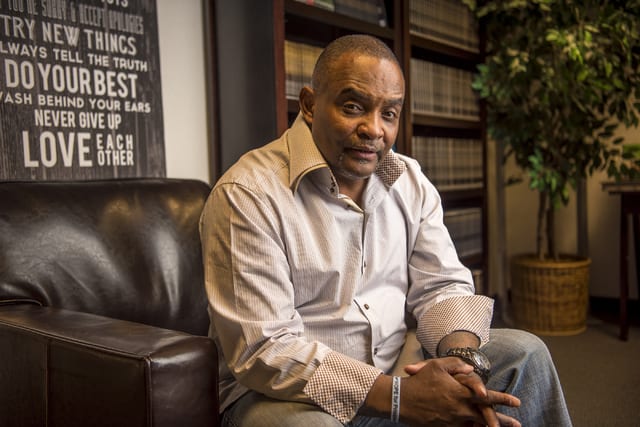 By MIKE HENLE SPECIAL TO THE LAS VEGAS REVIEW-JOURNAL

Editor’s note: This is the first of a two-part series about Hope for Prisoners, a program with spiritual roots that strives to help those who have done time turn their lives around. The second part, focusing on graduates of the program, will appear in next week’s Religion page.

Jon Ponder remembers well getting out of prison in 2009. He had been in and out of jail since he was 12 years old for crimes ranging from assault to armed robbery. But this time was different, he was determined to make his freedom last.

At about the age of 35, he decided to tackle one of the biggest problems people face when trying to fit back into society

“When a person gets out of prison, he or she wants to change, but many don’t know how to change,” Ponder explained. “It’s our job to help the ex-offenders become a valuable part of society.”

So, Ponder, now 50, founded what has become known as Hope for Prisoners, a program that includes mentoring and classes such as professional development, financial fitness, dealing with change and common sense parenting, to help people adjust back to the community.

Supported by a variety of local churches and businesses along with the Metropolitan Police Department and other criminal justice agencies, the nonprofit Hope for Prisoners is based at 3430 E. Flamingo Road and is supported chiefly by donations.

On a recent Tuesday night, the organization’s conference room had about 50 people telling their stories. The group included a former gang member along with the mother of a young man who won’t be getting out of prison anytime soon.

Sharron Grodzinsky of Henderson, whose son has four years left on a nine-year sentence for drug-related crimes, was encouraged by what she saw.

“One of my friends texted me to say I would be interested in this group,” she noted. “I had gone a week before to check and met Jon Ponder. His story was so moving and uplifting that I thought if one person can do this and work toward helping others, I wanted to be a part of it.”

Grodzinsky plans on taking a mentoring course through the group.

“There are too many people who end up back in prison, and I feel that Hope for Prisoners is a way to change that.”

The meeting was a combination of both men and women whose stories of the past were offset by their stories of recovery from drug addiction and survival after time in prison.

Several local businesses, such as Station Casinos, support Ponder by providing jobs to the ex-offenders.

Ponder has been knocking on doors telling his story to anyone who will listen while stressing that ex-offenders need direction to a new life rather than a return to prison.

“I tell people that Hope for Prisoners is something that God impregnated me with many years ago while I was in prison,” explained Ponder, originally from New York. “I came home from prison at U.S. Penitentiary Allenwood, a United States maximum security prison in Allenwood, Pennsylvania, and gave birth to the vision. The very first person I shared the vision with was Paul Goulet of the International Church of Las Vegas, who has been the senior pastor for more than 18 years. He gave me the encouraging words to go for it.”

Ponder is now also a senior chaplain with Chaplaincy Nevada and is in key leadership roles with the International Church of Las Vegas.

“I will never forget when Jon came up to me in church about six years ago and said that he had a vision to start a program for prisoners reentering society. He said he got the idea in prison and that he wanted to make a difference in peoples’ lives,” the Rev. Goulet, senior pastor at the International Church of Las Vegas, recalled.

“He went through our leadership program and he was very dedicated,” Goulet added. “It was his inspiration with God and we just helped. We just played a small role and watched this take off. It was incredible.”

“There was a time when Las Vegas was my playground,” Ponder said. “Now, it’s my mission field.”

About 1,300 men and women have graduated from the Hope for Prisoners program since its inception, Ponder said.

Some of the program’s biggest proponents are the same people whose job it is to catch lawbreakers. For instance, the group’s advisory board includes Clark County District Attorney Steve Wolfson and Metropolitan Police Department Undersheriff Kevin McMahill. Former sheriff Bill Young, now senior vice president of security and surveillance for Station Casinos, is on the organization’s board of directors.

Scott Gragson, an executive with Colliers International and vice president of Hope For Prisoners’ board of directors, is enthusiastic about Ponder’s work.

“Jon wants to take this national,” Gragson said. “There are new programs being added all of the time.”

“Once you see how real this program is, you can’t help but want to support him,” Goulet said.

“We see the wives, the husbands and the kids of those who have gone to prison in church, and these people need their moms or their dads. I get emotional when I see families coming back together thanks to Jon and Hope for Prisoners,” the pastor added.

“At the time I was taken into custody, I was not arrested, I was rescued,” Ponder said. “God took the biggest adversity of my entire life and transformed it into the single greatest asset that I have ever been in possession of, and that’s who I am in Christ.”

The next graduation for Hope for Prisoners is March 18 when participants who have gone through a series of classes covering 40 hours will be recognized.

Further information about the group is available by calling 702-586-1371 or by visiting www.hopeforprisoners.org.