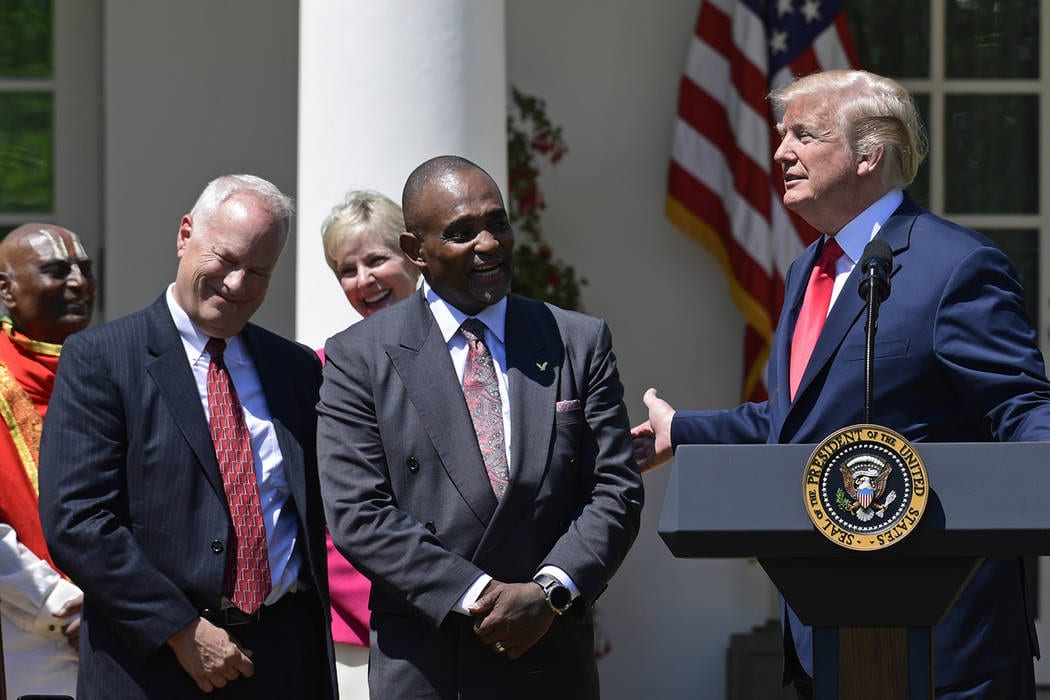 WASHINGTON — A former Nevada bank robber and the FBI agent who arrested him 14 years ago met Thursday at the White House Rose Garden for the National Day of Prayer.

Jon Ponder, a three-time convicted felon, sat next to Richard Beasley, a retired FBI agent, in the front row of the ceremony as President Donald Trump marveled at their story.

First he introduced Ponder, who founded the nonprofit Hope for Prisoners after leaving prison. The program, which has helped more than 2,000 former inmates, works with law enforcement, faith-based leaders and local employers to help reintroduce recently released prisoners into society.

“Jon grew up without his father,” Trump said, adding that Ponder’s mother was unable to keep the young man “out of gangs and off the streets.”

After Ponder joined him at the podium, Trump looked over his double-breasted suit and tie, and said approvingly, “You don’t look like a bank robber. You’ve come a long way.”

Ponder and Beasley met in Pahrump in 2004 when Beasley arrested Ponder for bank robbery.

“I’d been getting arrested since I was 12 years old,” Ponder told the Review-Journal. He had been apprehended “countless” times, and cycled in and out of jail, he said, before his conviction for bank robbery. It was in federal prison after his bank-robbery conviction that Ponder found God in solitary confinement.

Ponder said he had appreciated how Beasley treated him. After his conviction, Ponder’s then-girlfriend passed onto Beasley a package with a necktie and a note thanking the FBI agent for his gentlemanly behavior.

When Ponder, now 52, got out of prison and entered a federal half-way house, Beasley, 56, was there.

With their shared faith, the African-American ex-con and now-retired white FBI agent hit it off.

After working for a year and a half for a moving company, Ponder started his nonprofit. He said he could not have done it without prayer. “Absolutely 1,000 percent, you cannot do anything without prayer,” Ponder said.

Beasley, now president of a private investigation firm, Global Intelligence Network, applauded the program. At graduation ceremonies, he said, “this is possibly the one time in their entire lives they’ve had any kind of positive attention. You can see it in their faces.”

A 2016 Review-Journal story cited a UNLV study that found that between January 2015 and June 2015, 64 percent of the program’s participants found stable employment, a quarter of them found jobs within 17 days of finishing the course, and 6 percent went back to jail.

Ponder credits Las Vegas Sheriff Joe Lombardo, volunteers from the Metropolitan Police Department and other Nevada criminal justice officials for participating in the program, which lets offenders and their families know that law enforcement need not be the enemy.

“The thing about his program is that it works,” former GOP Nevada Gov. Bob List told the Review-Journal.

Some 200 guests gathered Thursday morning in the Rose Garden for the event with faith leaders from several denominations, administration officials and members of the Sutherland Springs, Texas, First Baptist Church, the scene of a mass shooting that left more than 20 dead last November.

Trump closed the event by signing an executive order creating the White House Office of Faith and Opportunity Initiatives that will, among other things, make recommendations on policies that affect faith-based and community programs.

“This office will also help ensure that faith-based organizations have equal access to government funding and the equal right to exercise their deeply held beliefs,” he told the crowd.

Daniel Mach, director of the American Civil Liberties Union’s Program on Freedom of Religion and Belief, responded with a statement that noted freedom of religion does not bestow the right for people to impose their beliefs on others.

“Many in the U.S., including people of faith, don’t want to give taxpayer-funded agencies or businesses open to the public a license to discriminate,” he said.